I’ve been thinking a lot about movement lately. Rather, I’ve been doing a lot of movement, with emphasis on handstand work and other bodyweight-focused modalities. Coming from a HIT and academic background, this left a nagging feeling of “going off the reservation.” That is, I am confident in what it takes from a training perspective to stave off physical and cognitive decline as one ages. I’ll snow you with a mountain of data and studies to support my position and then smugly point to the letters after my name if you need further proof.

That last bit is sarcastic, as you’d likely only laugh at how much I paid for said letters.

But, being a from the West, there tends to creep in bits of “either/or” thinking that contributes to having a hard time with this. That and I’m very visual so an amorphous blob of mind maps was hard to parse.

However, there was a clue as to how I could make it all work mentally hidden in an interview I listened to from Dr. Carlos Berio of Spark Physiotherapy. He holds both a graduate degree in exercise physiology and a doctoral degree in physical therapy. He noted how PT school is only equipped to teach you to take a person from dysfunction to normal function. That is, there is a point where a person with a knowledge base grounded in working with “functioning” individuals would be better equipped to progress the person further. That’s not to say that at PT couldn’t learn quickly, they do have the most education after all, but that their education as taught is not enough to take a person to wellness or supreme performance (or injury resistance, or what have you). He talks about the need for both to bridge the gap between rehab and high level performance.

So that got me thinking about how to put these pieces together: those who are well and high performing as dismissive of PT because on its face it’s “easy” and seems to be silly doing these small specific exercises. It occurred to me that many of those in “movement” disciplines are equally dismissive of general strength training and, to some degree, strength and conditioning because the movements seem contrived. Erwan Le Corre is fond of saying that nobody ever screamed “BICEP CURL FOR YOUR LIFE!!!” He has a point: from a motor learning perspective elbow flexion is a component movement. Running, jumping, throwing, kicking, and catching are phylogenetic, that is behaviors that are common to all humans that do not have to be taught. So if most movements and behaviors that have their roots in those base patterns, something like a biceps curl seems totally arbitrary. But the human body is supremely adaptable and we’re really good about working around weak links. So if your pulling is somehow being hindered by biceps strength, they have value and can no longer be considered arbitrary. See how this can get confusing fast?

I believe everyone had a valid viewpoint. To quote Ken Wilber: “Nobody is smart enough to be wrong 100% of the time.”So I came up with a visual that puts everything together in an easy to digest manner. If you can understand where you are (or your clients, or your goals) are along this spectrum, you can plan for your training and hopefully avoid injuries. The big problem is the name…first take a look:

I call it the “Grand Unified Training Spectrum.” Excuse the grandiosity, but I don’t know what else to call it. So what we see here is the delineation between where a person is along their frame of performance and where their goals are along a “specific/general” separation. I understand some goals could be classified as both. Remember: the map is not the territory and this is just a helpful guide.

Let’s take a look at some examples. First up is how a progression might go for someone who is an athlete recovering from an injury: 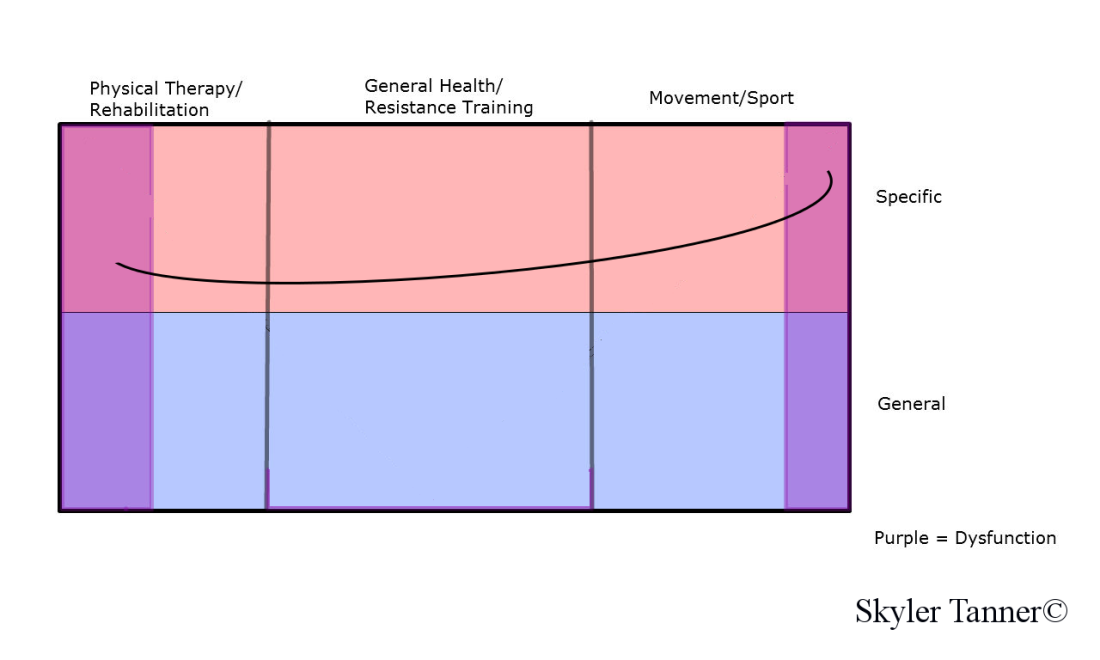 So what’s happening here is that an athlete suffers some sort of injury and receives specific sport physical therapy. From there they’re going to move relatively quickly through “general” strength training to bridge the gap to the strength and conditioning work they specifically need to do for their event. In this case think Olympic lifters or track athletes. This is the space where specialists live, and they’re really constantly on the verge of dysfunction. As my business partner Keith is fond of saying: Athletes aren’t healthy, they just look it. It should also be noted that people who start their kids off doing only 1 sport for all of their life have effectively widened the dysfunction condition. That is they aren’t generally prepared from youth; they don’t see a wide variety of stressors and stimuli that would better prepare a growing body for something more specific later on.

Here’s an example of how a person doing a “pure” HIT program and nothing else who happens to work a desk job might function:

Over my years of training I’ve seen this happen: you’re using biomechanically congruent exercises that exposes the joint to as little strain as is possible from strength training. The person has a job that parks them in front of a desk and they do nothing else with their life. I’ve made them muscle stronger, muscle healthier BUT if you take that too far you can develop problems. Play and physical activity away from training serve a variety of things but for your average bear it serves to maintain robust boundary conditions (hat tip to my client Paula). If you can’t get into a position because you’re too inflexible, you’re going to get injured, even if the muscle is very strong. If you train in a congruent range of motion under load but seek to maintain a wider range of flexibility unloaded, you avoid the dysfunction space. It should also be noted that distance runners live in this space:  phylogenetic behavior that, if too concentrated leads to injury. The least flexible runners tend to have the best running economy (a proxy for performance) but have also been shown to be the most likely to be injured.

It should be noted that one can live in the “general” rehab space for a period of time. I see a lot of clients like this, where I’m fixing their gait or posture. They don’t have any acute injuries, but they’re in a position to very quickly get injured if they don’t fix these general movement patterns.

Finally, let’s look at someone who may have been injured at one point, moved into general strength training, and finally decided they wanted to do some sort of movement modality. Here’s their curve:

In this case a person may have had a specific injury requiring specific care. After that they moved into a solid, biomechanically grounded resistance training protocol before getting excited about attempting to tackle some specific bodyweight movement modality. For the sake of illustration let’s say a one arm handstand. There is a point where “strong enough is strong enough” and the person must start working the skill to develop the specific strength (note: it’s not different than general strength, but coordinating all of the factors that are required to pull off such a feat requires far more than just strong deltoids). Of course, such specific goals can push a person to be injured in a way that is more likely to occur performing said skill.

So that’s what I’ve been thinking about. For me, this was something that let me parse where certain training modalities live, where they relate to one another, and how one person’s training can be different than another person’s without one being an idiot and the other being a heretic. 😉