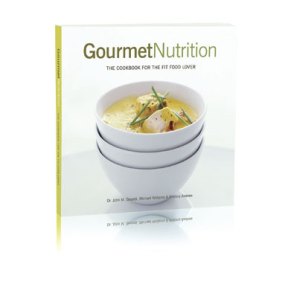 I love food. I love cooking, talking about, and torturing my girlfriend stranded in Ecuador with discussions of the flavor profiles of said foods that I’ve been cooking. She’s amused enough to want to shiv me, but that must mean I’m really describing things in tasty detail. I recently got my hands on Gourmet Nutrition 2.0 from Dr. John Berardi and, while filled with roughly 100 tasty meals, it’s more than a cookbook.

The original gourmet nutrition was an e-book that, upon being released for download, quickly made it to millions of hard drives via internet piracy. For the second book, Berardi opted for a real book that, simply, looks fantastic. As I noted, it’s more than just a cookbook, with Berardi explaining how the book should  be used in the context of a greater dietary ideal. In order for these meals to fit the “Gourmet Nutrition” title, they must:

Seems pretty easy for those of us who have been “on the wagon” for years and fairly convincing for those just starting out. Recipes start with breakfast items (most more carby than I’d like; more on that later), later cover red meats, white meats, seafood, and ends with desserts, dressings, and condiments.

The interesting thing for most individuals is understanding that carbohydrate intake is best tolerated around exercise. Thus, this is spelled out by defining meals with less than 25% of total calories from carbs as “Anytime meals” and meals with more than 25% of their calories from carbs as “Post Workout Meals.” As I’ve noted in the past, studies indicate that maximization of recovery and growth occurs from the use of carbs and protein post-workout. While you might disagree with this, the notion of having carbs when you’ve earned them should be appealing.

In conclusion, I recommend this book even at the rather steep price of $50. To get an idea of the high production value, you can get a free dessert e-book that has the same type of photography found throughout Gourment nutrition 2.0.