Typical dietary dogmatist, hunkered down in their foxholes waiting to rush the next front.

That must get tiring, right? Playing “mythbuster,” building straw men to knock down, wearing your “I know nothing more than you” like a suit of armor.

And that’s really it: things that can be done in the controlled lab environment are very rarely externally valid. Controlled meals and metabolic chambers? Nay. Metabolic carts and a perfectly timed bolus of amino acids? Nope. You get none of these, free-living human.

The fact of the matter is that the leanest, longest-lived cultures on Earth aren’t accounting for any of that crap!

A quick rundown, shall we?

The Blue Zones studies attempted to tease out a defacto longevity formula from the longest lived cultures on Earth. I’ll talk more about them in a minute, but if you back the longevity train up a bit further, you’ll find a researcher by the name of Lester Breslow. In 1965, Breslow started a study in Alameda county, California that examined the health habits of 6,928 people, with an eye toward 7 health habits he deemed most important (which is why the study is referred to as the “Alameda 7″). Their behavior was examined over intervals of up to 20 years and the data was parsed with quantitative analysis (which at the time didn’t happen with longevity studies). As a result, Breslow found that a 45 year old who followed at least 6 of the 7 habits had a life expectancy 11 years longer than that of a person who followed 3 or fewer. And these were good, strong, functional years free of major disease or complication, because what does it matter that you live longer if you can’t do anything with it?

What were the habits? Here’s his original list of the Alameda 7:

…That’s it. You were expecting some sort of lifestyle calculus? Something only the “chosen few” could accomplish? There’s nothing sexy here and that’s the point: what is done consistently, albeit imperfectly, is what makes changes in the long term. Interventions require rigidity and high effort; lifestyles do not.

Don’t believe that this one study was enough? The good news is that the research has been followed and examined many times over the years. More recently, Dr. Jeff Housman (one of my graduate school professors) and colleague put together a review of the data that came from the study and subsequent reviews. Check this tidbit:

So really the “Alameda 7″ is the “Alameda 5,” meaning that 1-5 on my list above are the big lifestyle “tricks” you need to attempt to do in order to set yourself up for a longer, stronger life.

So what happened to Lester Breslow? He died quietly in his home in 2012…at the age of 97. Maybe there’s something to this stuff after all?

The main thrust of the Blue Zones starts with a study, known as the Danish Twin Study. This study followed 2872 Danish Twins born between 1870 and 1900. After all of these pairs had died, statistical analysis was performed and determined that ~25% of the variance in longevity can be attributed to genetic factors. Later studies give a slightly larger range, from a high of one-third to a low of 15%. So if we’re pessimistic, only one-third of our longevity is related to genetic factors, thus the remaining 70% is due to lifestyle. This was the thrust of the Alameda 7 study: follow some simple habits and you’ll gain quality years of life.

The book is based on the work of Michel Poulain, who identified a mountainous region of Sardinia where men lived longer than women, but both live longer than the rest of Sardinia. Fun fact: it’s a “Blue Zone” because that’s the color they used to identify the region. Really, take a look:

After the statistical analysis was found to be accurate, that there was in fact a positive longevity outcome, the search for more of these places around the world began.

So after digging and intense statistic analysis, these 5 zones have been confirmed:

From these 5 spots, the authors attempted to “tease out” a de facto longevity formula, which is this:

Now I won’t spend time unpacking those, but I would suggest that they’re directionally accurate and very similar to what was found in the Alameda 7 (5?) study. If you were able to follow the above list regularly, then you’d likely be in a good place to maximize your longevity free of chronic diseases.

I have some problems with the conclusions derived from the Blue Zones. Not enough to throw it out (it’s really a great piece of work) but to bring attention to things that I feel are worth reducing the importance of when compared to the authors of the book:

Adventists & Mormons: It was never about meat

Going back to my whine about isolating small variables and attempting control them, remember that our bodies aren’t these time-dependent output machines. That is, an input will not always give you the same output, in the same amount of time…there’s a constellation of variables all in flux that affect the final outcome.

This is the problem with any self experiment: humans tracking inputs into our biology leaves all sorts to be desired…the margin of error is just too much for any sort of meaningful information to be derived: 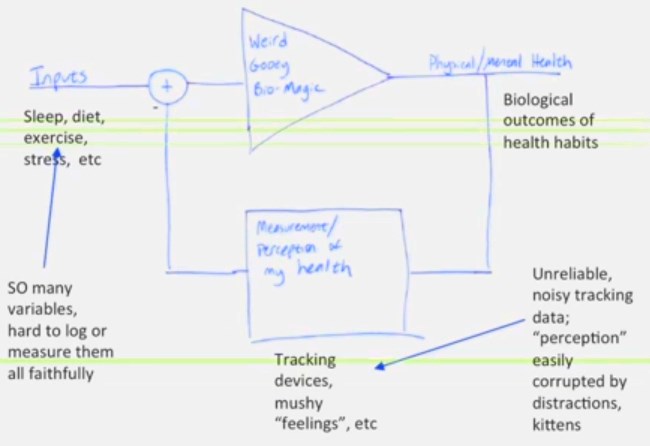 We’re not machines; if we were, we could expect a given input to yield a linear, time-consistent response. X volume of powder A yields Y response in Z minutes. But it doesn’t and we don’t. Not only are we not machines, but some of the greatest advances in phlebotomy and proteomics research have come when we get the human element out of the way, mostly for the “unreliable/distractions/kittens” element mentioned above.  Examples:

So just live all Dionysian and  attempt to not control anything? No, but you must understand that the inputs are signals…they are stimuli. The stimuli is directionally accurate and dose-dependent. Further, the dose will have varying outcomes depending on the state of your physiological milieu at the moment of input. You can be sure ingesting protein will lead to new amino acids being available for protein synthesis, but the standard deviation of the response will vary depending on a variety of factors that you can never hope to control.

Further, the body is directionally set by the stimuli…it doesn’t care nearly as much by the context of delivery as much as by the quality of the content. This is especially true in the “paleo” community, with the idea that “Caveman X was on the savanna, therefore only could lift heavy rocks and get thorns in their ass when they screwed. I must mimic this for maximum health!” Here’s the thing:

The body doesn’t care about concepts; it only cares about stimuli.

The SAID principle (specific adaptation to imposed demand) referred to the type, quantity, and frequency of a stimuli. So while our hunter-gatherer ancestors trained their posterior chain by hauling an animal, we might dead lift or use a good lumbar extension. The stimuli is similar, no hauling required. The mismatch was never “We’re not hauling bison out of a ditch and eating mongongo nuts”; it was “we’re never exerting to a sufficient intensity while eating lots of processed garbage.” You mimic the stimuli while reducing the risks.

Why mention all of that? Well I think the above is largely the root of why people get hung up on a single dietary variable like meat (for instance). Never mind that so many studies lump meat in with, say, “fatty” foods like potato chips and ice cream (really!); the food stuffs are just one variable in a larger picture, going back to the title of this post. If the totality of the lifestyle is in order, the inputs hold less weight because the whole spinning plate is much more balanced.

Example: Seventh Day Adventists are often credited for their longevity, which is always reduced to diet. However, the most thorough studies never claim it’s just the diet: they’re always looking at the total lifestyle to draw their conclusions.

Similarly, studies that look at a similar population (California Mormons & California Adventists) show similar improvements in longevity due to the totality of the lifestyle:

Now it’s important to note that this isn’t a comparison between groups…or rather, it’s between one religion and the average Californian of the same age. And the statistics used in each study may be slightly different (like which inputs & variables they found most valuable, etc. I have no interest in unpacking them). The point is that if a single variable, meat, was a keystone/linchpin/cornerstone in the longevity equation, then the statistics should indicate some change. And since it’s often cited as “the” culprit, the statistic should jump out and punch you in the face, the same way cancer rates in those who smoke isn’t a tiny statistical anomaly.

Here’s the point: all of the nerding out in service of the big picture, the lifestyle, is great. A regular sanding of the details leads to a better overall picture. However, nerding out in order to replace the big picture is a fools errand, a big distraction that keeps one focused on a “big secret” that simply doesn’t exist.

One thought on “It’s about the lifestyle, stupid.”