This is a manifesto of sorts.

I turned 28 about 3 weeks ago, I’ll be entering grad school for exercise science in the fall (the program will last 2 years), I’ve been married for over 3 months (things are great by the way), and I’ve lived in Austin for 7 years.

Why am I listing these things?

I’ve been thinking about the passage of time, about how quickly it goes, and about (of course) physical culture. When we start this sordid affair, we have dreams of being the next Mr. Olympia…ok, maybe not. Slin gut isn’t attractive on anyone. However, we believe we’re at least going to end up like Casey Viator’s “before” photo from the Colorado experiment:

If you are smart, you quickly realize your genetic lot, but you’ll fight it because you believe the headlines from Muscle and Fiction. Or you listen to the bros on T-nation. Or your get ADD-OCD: you become absolutely obsessed with a new training program for 10 minutes before you move on to the next, each holding the “secret” to superhero status. Whatever it is, you try to make what your genetic destiny is happen faster than it can happen and take it beyond its capacity. As a result of this lonesome dance you might abandon what is best for you.

I’ve been training for 15 years and “seriously” strength training for 12. During the first couple years I trained exclusively HIT, exclusively Superslow. I had a running vertical leap of ~39″ with zero explosive training… I trained hard once a week and jumped a lot, just like every dunker on YouTube who jumps higher than you. I gained 16lbs during my first 4 months of training when I “got serious,” most of which was because I was underweight from 2+ hours of basketball daily throughout high school and an atrocious diet, think eating a tub of cream cheese with a bag of pretzels atrocious. I gained that weight training once per week on ~6 exercises per session, all superslow with a sprinkling of “special” HIT techniques thrown in.

Once the newbie gains tapered off, I got anxious. I didn’t have a wise old mentor for perspective…actually, I did but he was unable to say the things I needed to hear in a way that I could hear them. Old football coaches don’t always have a way with words! I started program bouncing, changing exercises and HIT methods too often, eating way to much to attempt to force muscle gain (pushing with a rope, as I explain it now). I got fat, but I didn’t get more muscular. I took the job here in Austin at Efficient Exercise and decided I was going to achieve my genetic destiny.

I came to Austin and, after about a year, I decided to get even “more serious” than I had ever been. Methods used included but was not limited to 531, GVT, HST, Westside, Wave Loading protocols (ala Pendelay’s hormonal manipulation cycle), Doggcrapp, Max Stim, Myo-reps, Reverse pyramid, and the ubiquitous 5×5. I ate my way up to 220lbs but only had 3/4″ more on my arms than I did at 188, so while being a fatty powerlifter netted me a a 400lb box squat and 455 x 4 on the trap bar deadlift, it didn’t give me more lasting muscle but did give me a pulled erector spinae. My levers seemed to improve (good for strength) but it was not sustainable to eat a whole pizza every night to maintain the weight (bad for health). After cleaning up my diet and looking toward health and longevity, I find myself leaner but smaller than I was nearly 10 years ago. If you would have told me that when I was 19 I would have cleaned out the skull with a .38 special…sorry, manly weapon… M1911, vintage 1945. Not really, but you get my point. I wanted to be the hulk and am (and always was) built to be a fitness model.

I made pretty solid gains on once a week training, which in hindsight was fantastic gains given the amount of time invested. The fact that all the hours I’ve spent fretting over training, feeling like hammered dog shit, and attempting to fit what a guru/old iron head/ genetically elite individual thought was dedication has netted me no gains over the last 6 years. All the “muscle building” exercises made me stronger on those exercises  but never made me bigger without eating to gain fat. This makes sense because, as any weight class strength athlete will tell you, strength is a skill that you can drive up for a long time without significant weight changes. In spite of that I still jump higher than most anyone reading this blog. Not a boast but a recognition of how we often pay the least attention to that in which we are best suited.

Regarding rate of gain, I recently contacted NGA and IDFA pro bodybuilder Josh Trentine regarding his rate of gains over the course of his training career and here’s what he told me:

So the math on that means he gained ~1.85 lbs of muscle per year of training. You might say that, since he uses Superslow (or Renex as he calls it now in its more mature form) its the system’s fault and he could have gained a whole lot faster with high volume training. To that I say have you met Dave Gooden? 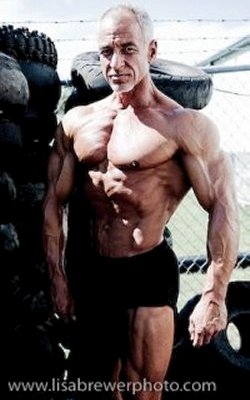 In this interview Dave explains that he’s gained 30lbs of muscle in 20+ years of training. For those with low math IQ, that’s 1.5lbs of muscle per year. Itty bity stuff, right? You can gain more in 2 weeks, right? I thought the same thing and have ended up spinning my wheels for years.

My point here is that you can’t have it both ways: two natural pros gaining at roughly the same rate on 2 totally different systems. Some say Mr. Goodin is the greatest natural pro ever, with perhaps the greatest genetic lot for the sport ever. So if the greatest genetic card “only” gained 1.5lbs/year on average, an “inferior” system putting about the same amount on another, “average” natural lifter must be pretty good, right?
(Update 9/4/2012) Another bodybuilder, Chad Shaw, says this:

It took me 26 years to put on 40 lbs of muscle! That averages out to roughly 1.5 pounds of muscle gained each year!

He’s not doing too bad, either.

If you told me that if I could train hard for the next 10 years that I’d be 5 kilos heavier on stage I’d say “Fuck, I’m gonna do that.” … If you say that to someone else they’ll tell you to get fucked.

And one more for good measure: have you met Clarence Bass, old man ripped?

Mr. Bass has been a meticulous record keeper, performing more hydrostatic weighings than perhaps anyone. In his book “The Lean Advantage,” Mr. Bass explains gaining muscle after 40:

Or an average of 1.83 pounds of muscle per year, all while staying obscenely lean…and that’s a compliment! Also note that this is much later in his training career, well past his days of “best gains.”

My point? 4 examples of a rate of gain not exceeding 2lbs per year over the course of a training career, 4 different genetic lots on 4 totally different programs. That’s 0.0385 lbs/week. Still searching for that “magic” program? Maybe it’s simply work hard on whatever system suits your disposition best without hurting yourself and you’ll get whatever you can get over the next decade or so. Yes it takes that long for 99.99999% of natural trainees.

(Of course, some idiots on bodybuilding websites will imply that when I say “average” I’m saying you can’t gain more than 2lbs/year from year one. This is false.  I just noted that I gained 16 pounds in 4 months when I started out; that’s not sustainable over a lifetime and there is no “magic” program that is going to change that.)

Not Was All Lost

Huge amount of time wasted to not get anywhere but as I’ve gotten older I’ve gained a greater appreciate for those who stay away from the internet when it comes to things like this. You might not find my methods hardcore enough, you might think that I can do it faster with your routine, you might think that in order to be truly “fit” ( a hugely subjective term) you need hyper complex systems filled with esoteric rhetoric…and maybe that’s true. Maybe the stress and time to push toward perfection isn’t worth the cost. Maybe if I had been patient, I could have been 200lbs of lean tissue on a merely “adequate” routine by now. Maybe. I know I’m not likely to find “the answer” on the internet, only distraction from the real work.

Ultimately, that doesn’t matter. I have 60+ sessions of clients who find how I teach training to be adequate to make their bones stronger, their muscles stronger, their gait better, their resting heart rate lower, their quality of life better. I didn’t need to be a monster to earn their respect like I thought I would; I had to produce results they were looking for and I needed to be smarter than your average doofy trainer.

I also learned that I didn’t need to be “huge” to get laid, to play sport well, to be athletically better off than 99% of the people I meet, you know anything implied in our popular medial. Basically all of the angst that I had developed toward my training was a direct result of people with different goals than my own. I bought into their goals, allowing them to dictate the rules of their game. No longer is this the case. My mother’s death reminds me that life is too short, sometimes tragically so, to worry about what others negatively think.

Regarding people talking shit about how a person trains, of all things to get worked up about, I offer this: those you care, don’t matter; those who matter, don’t care. Or to put it another way: the egos are so large because the stakes are so small.

Training can do amazing things for people, but focusing on it at the detriment to everything else takes away its ability to make all aspects of your life better. Recently at the LA Fitness Expo, I caught a portion of a talk Jay Cutler was giving about what he had to give up to be a champion bodybuilder, namely his family and friends for training, diet, recovery, etc. The thing is that there were people in the audience taking notes as if THIS was the thing they had to do to get bigger! They took his warning as a guide! Incredible.

I write this mostly for myself, as a return to what got me to damn near my genetic potential in the first place. High intensity weight training to total muscular fatigue, focusing on emptying the tank as fast as possible and judging progress by internal cues rather than forcing external metrics (e.g. raising weight just because or fidgeting to reach a better TUL).

If I end up training with weights more than 1 hour per week, I’m doing it wrong. I bet I can get it back down under 20 minutes like the old days. Hell, less than 10 minutes has let Vee achieve 18+ inch arms.

And I bet I’ll still jump higher than 99.9% of the population:

If I make no gains above where I am now, I’ll still have superior return on investment. Not all was lost in all of that time wasted, as I’m confident that bouncing around won’t do a damn thing for me and my goals, should the itch to jump around return. This is my reminder that I can only control my effort: what exactly my returns is beyond my control. There are more important things to think about and certainly more things either within my control or partially within my control. My genetic lot is as far away from my control as Pluto is from where I sit.

That’s the real gem to come from this…I count my blessings for that.